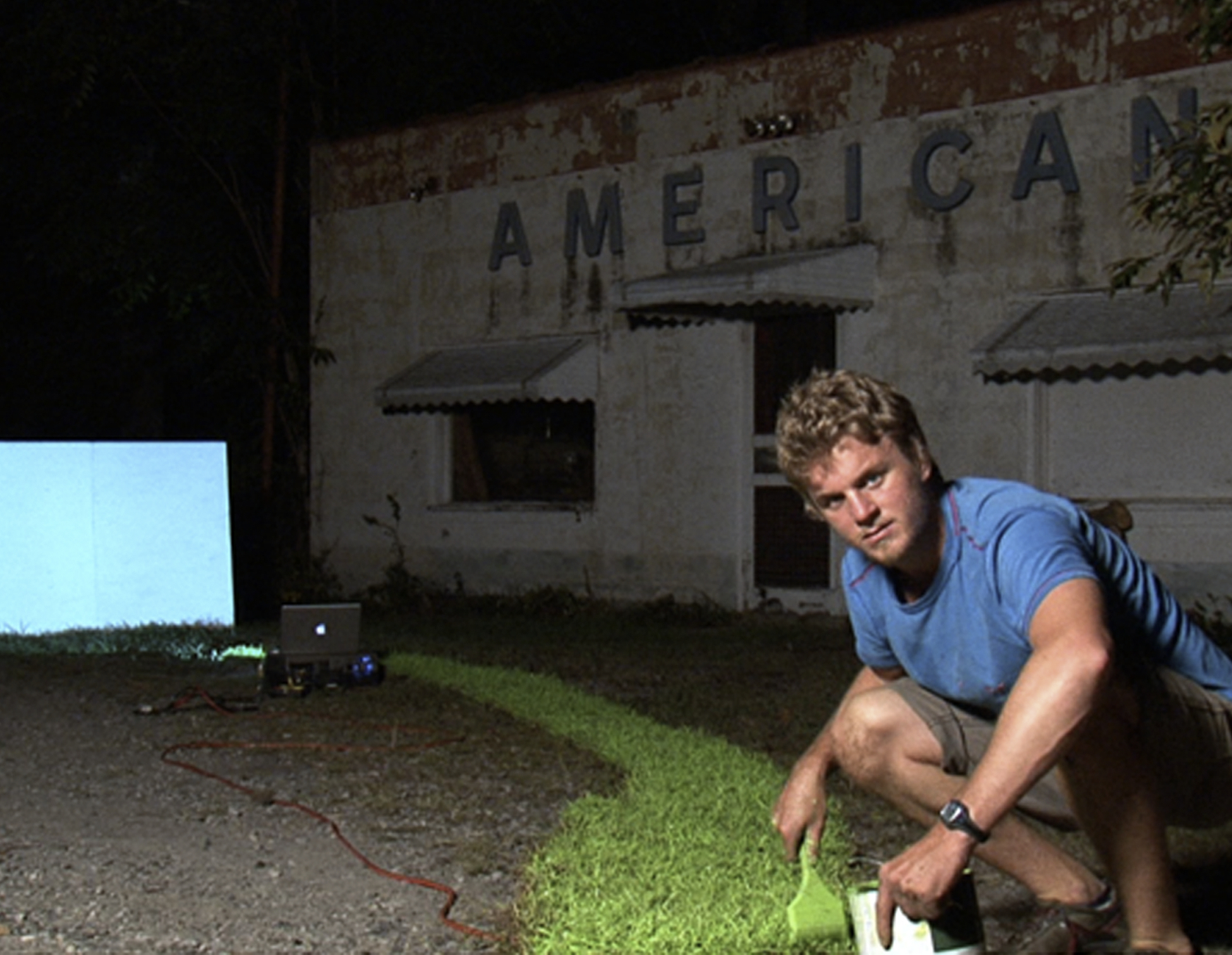 Shot at night in a desolate area just outside of Greensboro, NC, The American is ambiguous in terms of narrative or the role of the viewer. From the film’s very beginning, the viewer is situated in a position that is both experiential and confrontational and it is from this position that one watches the film’s enigmatic events unfold.

The film’s protagonist, whose identity is concealed from the viewer, is nonetheless shown to be an archetypal “American”—blond haired, blue eyed, and his actions are slow, methodical, even mundane in portions. However, it is the inconclusive nature of this series of actions, accompanied by the eerie setting and the viewer’s disquieting role in the film—as attendant—that give The American its emotive resonance.

The American is rich in symbolism, and each prop used in the film is rich with layers of meaning and contradiction. The sections of sod, which are central to the viewer’s experience from the beginning of the piece, at once represent nature and artifice. This theme continues in the young man’s mopping of the sod, an absurd image that implies the idea of sterility, and man’s governing the natural world. The American’s protagonist controls nature, not just in the handling of the sod squares but also in his precise placement of them. The level of control the film’s protagonist exhibits is inexplicable, and this fact lends itself to The American’s enigmatic quality.

Towards the end of the film, the protagonist projects a beam of white light, stark against the rich, dark background, symbolic of a void. The protagonist stares blankly into this beam, and his meaningless actions cease. The film’s conclusion reminds the viewer of its title—The American perhaps suggests that this is the way in which contemporary Americans conduct their lives. Moving through life, detached, completing a series of thoughtless actions, the American of the film creates his own false reality, a constructed habitat governed by minute control. However, this American operates in a vacuum, and from the film’s conclusion, the viewer can assume that he is content to live in this void.

From my own experience of course I have first-hand knowledge of both the comfort and the conflict zone. The American in this work, by contrast, apparently knows no other existence and hence knows neither the pain and fear he is avoiding nor the diversity and richness of life he is missing.