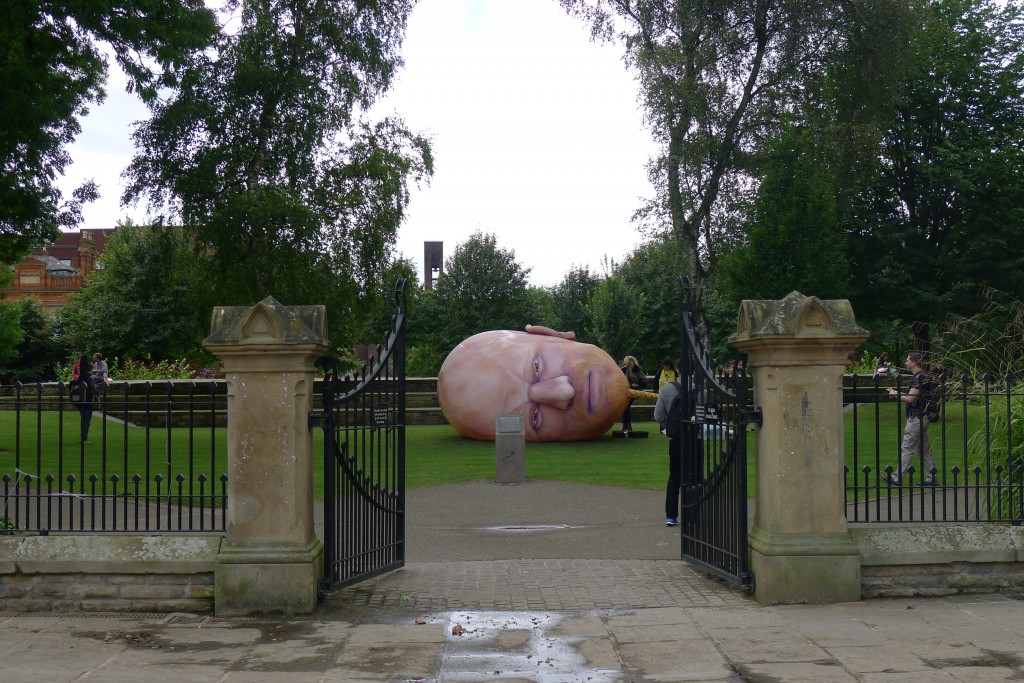 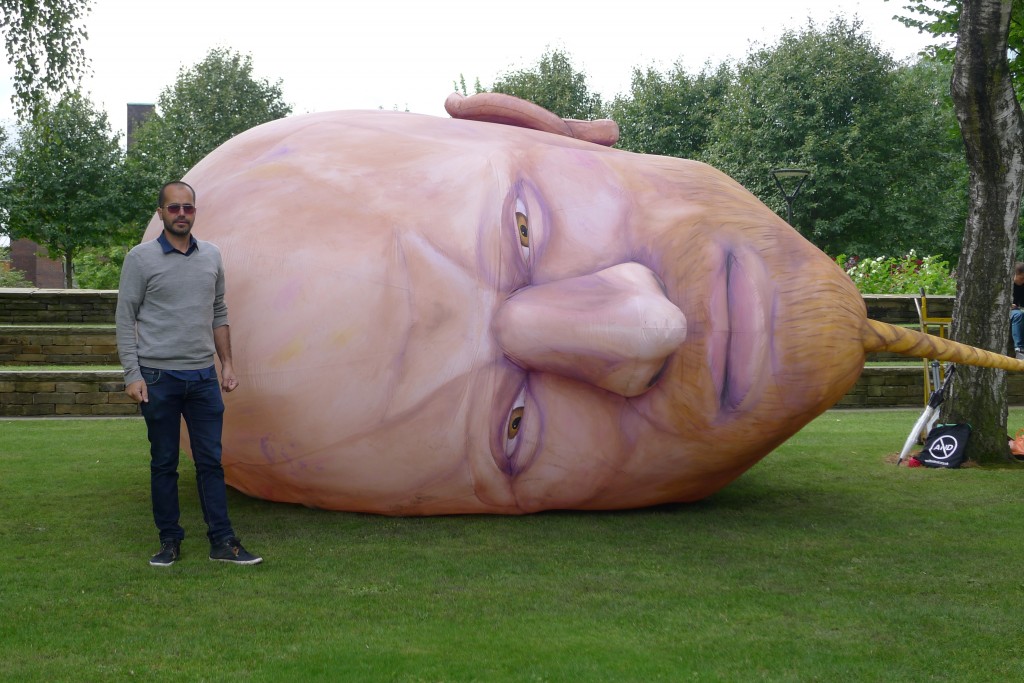 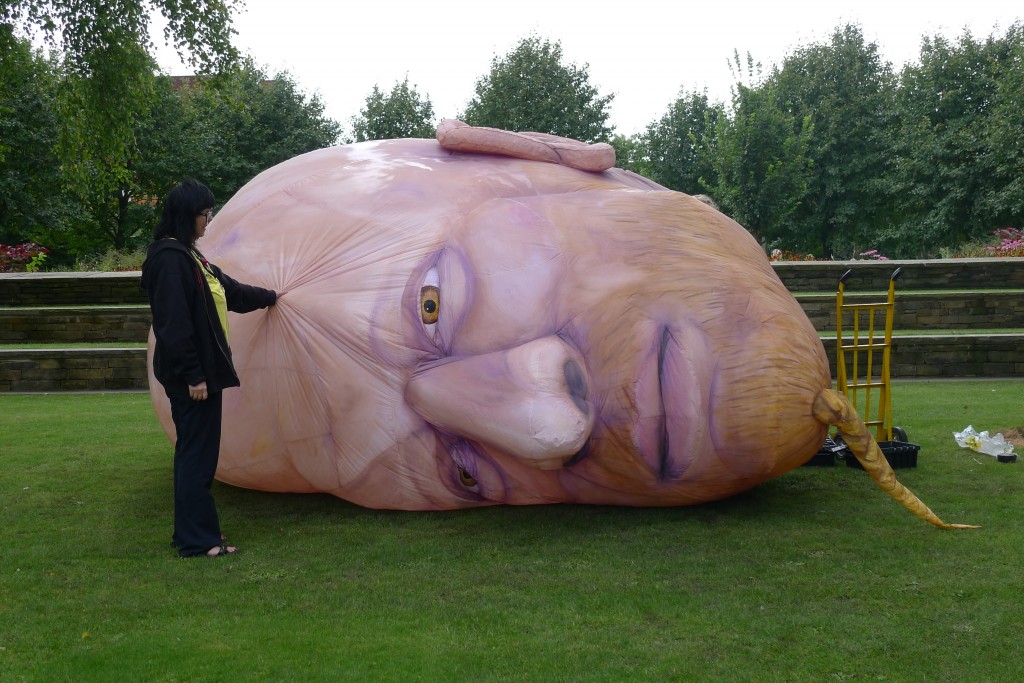 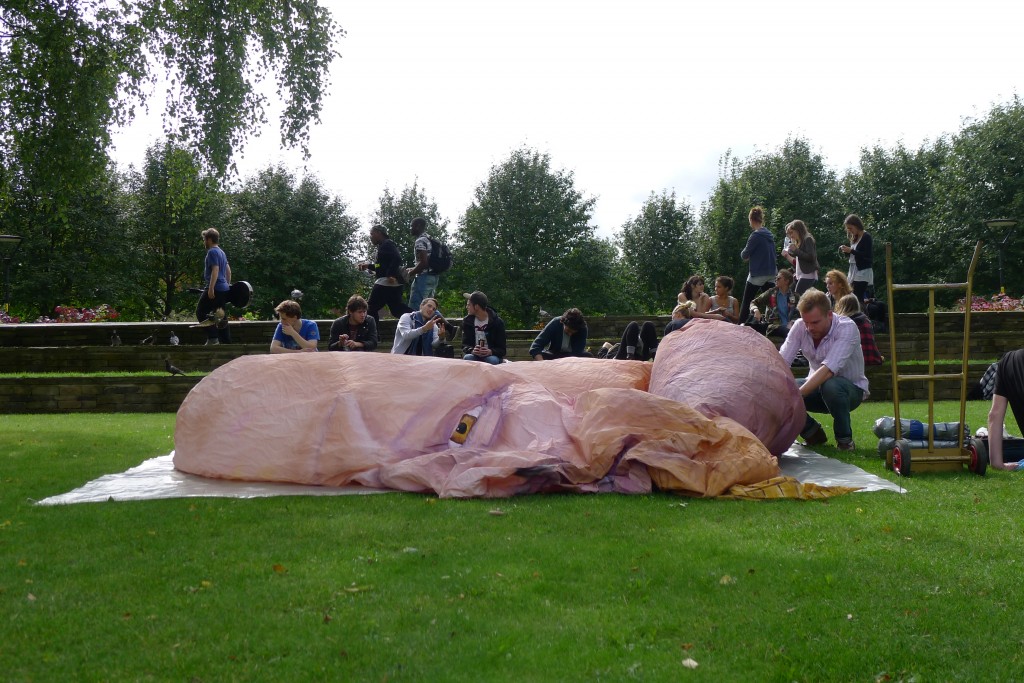 Technoviking is a site specific sculpture, turning the image of a UK “Youtube sensation”,  Technoviking, into a blow-up sculpture. The piece references the contemporary obsession with fame that is created by the masses themselves. With the introduction of the Internet and websites such as YouTube, the distribution channels have shifted from the hands of a few, to the global public. Viewership is becomes more powerful than content. Viral videos and memes exemplify the rapid spread of ideas,  grand and minimal alike, often playing toward humor and entertainment value. To create a temporal iconic sculpture of a “YouTube” sensation is to monumentalize this shift in fame and public influence, with a light tone and interactive manner. The sculpture’s rate of inflation directly correlates to its popularity on Twitter– notice of tweets containing “#technoviking” are sent to the pump system, which subsequently inflates the piece. Thus, Technoviking is kept “alive” by direct participation of Internet viewers, an act that serves to give the meme a second wind of fame. First-hand visitors are encouraged to engage with the sculpture as it moves in the wind. As one views the sculpture they are ultimately face-to-face with the familiarity of pop success and their own personal aspirations and public persona.

More Information
Recently German court has ruled against the freedom of art and expression. The sued filmmaker plans to make a film on this case.

The story centers around a well-known internet meme – The Technoviking – that started in Berlin and exploded in the US, spawning thousands of recreations. Years later, after it had gone wild online, the subject of the original video emerged and, without dialogue, sued the artist and filmmaker Matthias Fritsch in court for personality rights and demanded he not only remove his video, but somehow remove all of the user-generated content from around the globe as well. Which was, of course, impossible.

Fritsch won part of the case, demanding the freedom of art and expression, but has been losing the expensive battle against the high courts in Germany when it comes to uncleared personality rights versus money (as in, users that make money through YouTube ads). Unfortunately the plaintiff is still not pleased with the trials outcome and is taking it even higher up in court, which means a financial and professional disaster for the artist.

The filmmaker is planning a documentary that brings this discourse to the public, and explores the theme of sharing culture, which is what the Technoviking meme stands for. He has launched a crowdfunding campaign on http://www.indiegogo.com/projects/the-story-of-technoviking/

Side info:
Impakt, the Dutch Media Arts Festival, recently launched a contest for the best statements on the case:
http://impakt.nl/headquarters/support-matthias-fritsch-win-e200-technoviking/