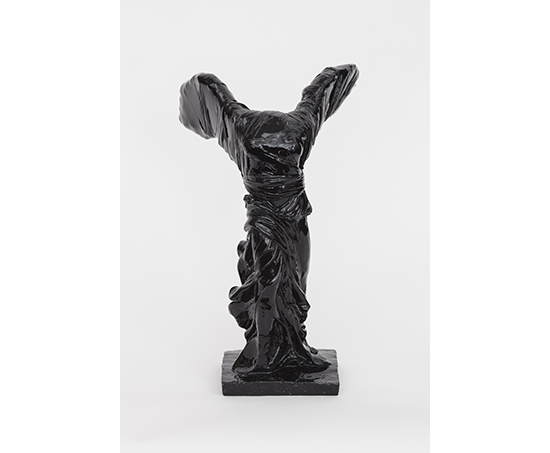 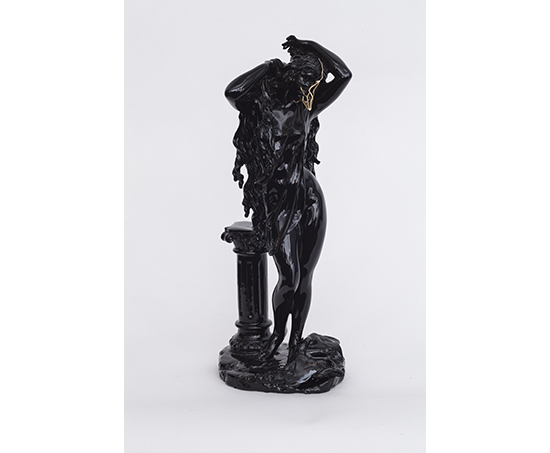 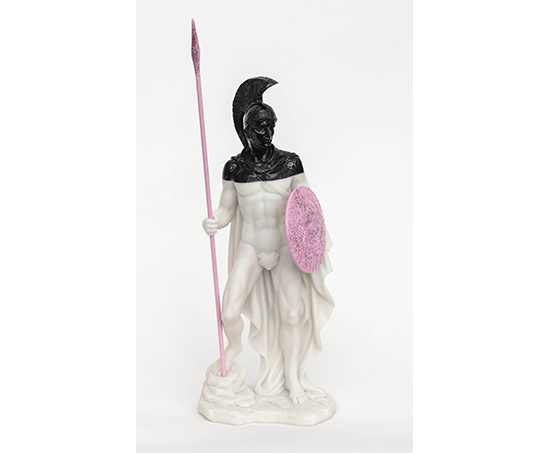 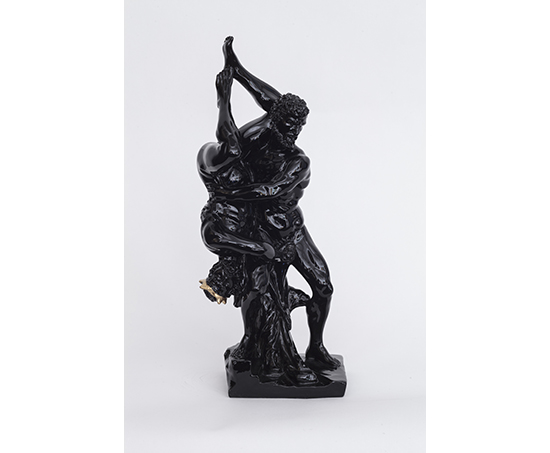 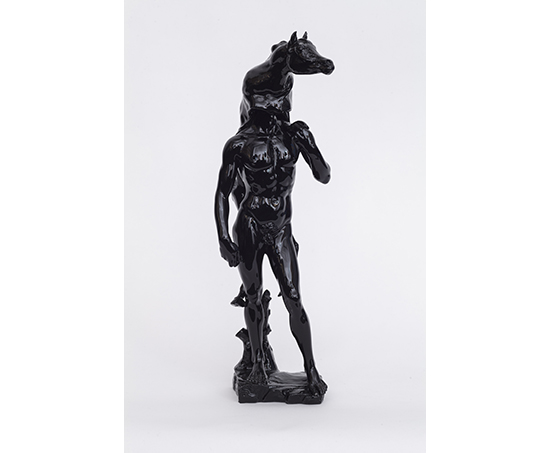 History casts a long shadow over its own trail, stumbling forward on the pavement of a repudiated past. In the wake of ISIS’s brutality and the wanton destruction of Iraqi cultural heritage, Lovely Pink resonates with the destabilization of iconographic structures, exploring their potential to generate a multiplicity of meaning through aesthetic intervention. By harnessing a minimal language of signs, the focus shifts from an authoritative perspective to any number of possible interpretations.  Each rendering of Lovely Pink thus de-establishes perspective norms by interjecting elements of violence that intersect with its own subversion.

In Lovely Pink, miniature reproductions of ancient Western iconography in cold cast resin and bonded marble are destabilized by veils of heavy black enamel and the trappings of industrial heated shrink-wrap. The shrink-wrap and enamel blend with the statues, reforming the sculpted surface with a molten and indistinct fusion that alludes to a long history of armed struggles to remake the present by revoking its past. This heavy veil obscures faces, appendages or whole bodies in turn, dipped and dripping with black like so many casualties of an offshore oil spill. As an oil-based paint, the enamel’s hard shell simultaneously conceals and shelters what lies within like a high-gloss scab over fresh wounds, a tension underlined by the shrink-wrap whose function as bandage or bondage is unclear.

Some sculptures are deliberately emasculated.  In Ares, God of War, Ares’s spear and shield are rendered with a layer of Lovely Pink glitter in a stylized reference to children’s toys, calling to mind the playful war games enacted without consequence in nursery battlegrounds and playroom arenas. Its presentation of hyper-masculinity might even appear comical under the intimacy of these miniature reproductions, if not for stark relief of its neighbors. Perseus Beheading Medusa strikes the darkest tone, drenching the entire scene in funerary black. Perseus stands victorious, rising above a beheaded female form and presenting us with its blurred and featureless head distorted by enamel wrappings. Here, the weapons are lethal and its victim has been obliterated both in body and in name, standing in for the innumerable nameless fallen.

Winged Victory of Samothrace presents the goddess Nike whose wings are trussed by the heavy enamel bondage and where the absence of Lovely Pink glitterevokes its metaphoric presence. Instead of an aggressor whose weapons are allayed by levity, Nike is its recipient—an artifact of a legacy of historic violence whose decapitation and dismemberment marks an oppression of victory that dispels any possibility of triumph through warfare.  Indeed Nike’s means to sound the call of victory are denied her—no arms, no hands, no mouth with which to speak but for the remnants of her body through the passage of time and history, which continue to struggle against the errant winds of a battling sea. Winged Victory’s place in Western iconographic cannon is immortalized with the marks of such violence, is deciphered in terms of such violence. In Lovely Pink, it is this very struggle reflected in our contemporary moment that veils Nike anew—binding her wings and draping them with a heavy oiled coat. Should she fly to the sun like Icarus, her wings would soon erupt in flames, bursting the past asunder with an improvised explosion to speed forwards towards an uncertain future.