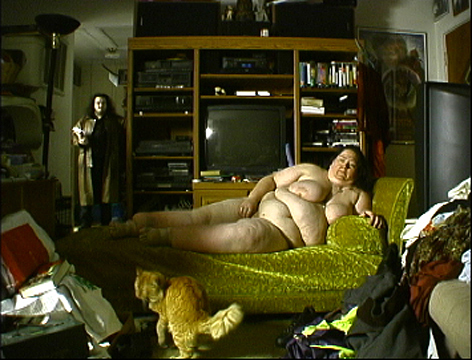 We certify the object as an ideal. By doing so, we create a void, and we try to fill that void with ephemeral happiness, which we call the object.

In my project Midwest Olympia, Olympia represents many concepts. While Olympia is a particular reality as we visualize it, it also represents a state of mind. Provocatively posed upon the chaise, the subject is so shockingly sure of herself. The juxtaposition of such a bold character amidst mundane surroundings results in a project that is aesthetically appealing yet heavy in content. It is not my intention to deal only with aesthetic pleasure, but also to challenge the viewer through aesthetic pain. Midwest Olympia forces the viewer to accept my representation of one woman’s isolation within her own reality while challenging the viewer to question his own.

In the same way that the various objects surrounding Olympia’s reality are only ephemeral by-products of her world, we as a society objectify our surroundings. Our surroundings may not always be tangible. We accept as mundane what another looking in on us may see as shocking. This is the case with our view on war. As such, Midwest Olympia represents an image of war. Because we ourselves live in our own “Olympias,” external factors do not affect us as strongly or as personally. We exist in a comfort zone in the midst of chaos, unable to recognize the goings on within our own realities. As Jeff Wall commented upon Delacroix’s painting The Death of Sardanapalus in an interview, “it shows the eroticized ideal of military glory… being turned inward, back toward domestic life.” The capitalist concept that possession of objects is directly related to happiness tends to result in a society of unquestioning, isolated, materialistic, and perhaps even gluttonous non-participants.

In a project such as this one, because the viewer is far removed from the conflict within the work, it is important to communicate to the viewer through a recognizable language – in this case visual language, I have filtered the subject through historical and psychological contexts of the subject’s specific locale. While the frame is the historical window to the past, the moving image becomes the constant present of unpleasant reality. In a video installation, there is another level of impact. Besides the content of the image, we also observe movement: a language that the body understands. However, the stillness of the two participants in the frame exemplifies a persistent-present, a current condition influenced by internal or external circumstances that inhibit change. The moment something is done to change a situation, the persistent-present becomes a progressive present where change can occur. Thus, my Olympia exists in the persistent-present.

Winter, the model, is very courageous for opening her door to us. Through her efforts to openly expose her vulnerabilities and weaknesses, she has, either purposefully or accidentally, exposed the viewer to her inner chaos, which she herself does not recognize easily.

Coincidentally, there was a “happy accident,” as Duchamp would say. A few minutes into the shooting, the cat decided to become part of the project. It wandered into an awkward situation to find itself facing its naked owner. It was perhaps an unfamiliar situation, so it left Winter to go to Phoenix, the other owner. But Phoenix, the secondary model in the project, did not pick her up. Being ignored, she turned around and started looking at the camera. I created the conditions for this in hopes that this would happen. Since then, I’ve learned that Manet, the painter of “Olympia,” did not include the cat in his original painting, but instead later added it as an afterthought. Also, I understand that the cat in French culture symbolizes desire. Ironically, desire wanders into our lives yet has no desire to remain.